Guidelines for Formatting the Paper

Margins should be one inch all the way around unless otherwise instructed by the professor.

Twelve-point size and Times New Roman style are used most often, but some professors have special requirements; be sure to follow a professor’s requirements precisely.

Double spacing is required throughout the entire paper, including the reference page.

MLA documentation does not require a cover page; instead, the student’s name, instructor’s name, course, and due date are typed in that order on the upper left-hand side of the first page of the paper.

The first page of text is considered the first page of the paper. The page number is placed on the upper right-hand side of the page, half an inch from the top of the page, and is preceded by the last name of the author. Be certain to also number the reference page(s) in the same manner. Be sure that the font used for the last name and page number are in the same font as the rest of the paper.

Be sure to watch the video on formatting a paper in Word.  It is located on the Videos/Tutorials tab. 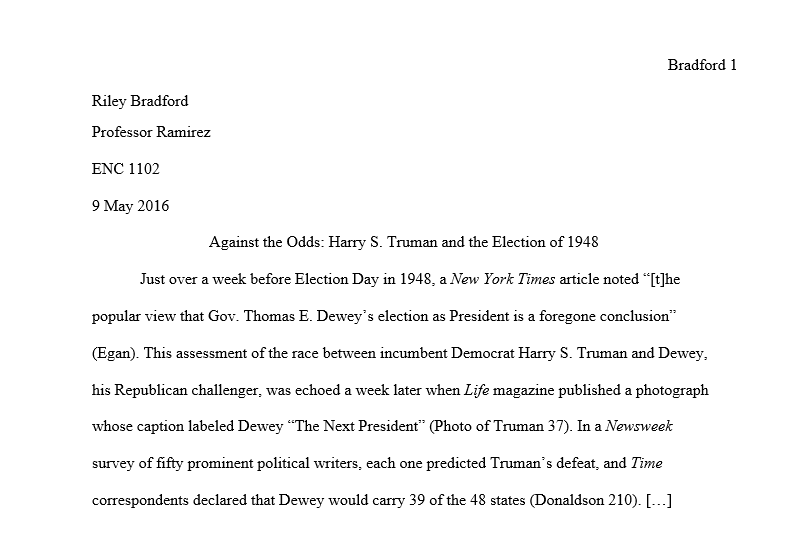 The author’s name and the page number where the information is located are placed in parentheses at the end of the cited information.

Example (paraphrase): Planning is the first step to attaining a goal (Jones 14).

Example:          Jones and Cruz theorize that setting goals is the first step towards success (45).

Setting goals is the first step towards success (Jones and Cruz 45).

Again and again through the autumn of 1948, Dewey’s campaign speeches failed to address the issues, with the candidate declaring that he did not want to “get down in the gutter” (Smith 515). When told by fellow Republicans that he was losing ground, Dewey insisted that his campaign not alter its course. Even Time magazine, though it endorsed and praised him, conceded that his speeches were dull (McCullough 696). According to historian Zachary Karabell, they were “notable only for taking place, not for any specific message” (244). […]

The sample paragraph above is modified from:

A reference page is the other method, used in conjunction with in-text citations, to ensure that plagiarism is avoided. Every source used (quoted or paraphrased) in the paper must be recorded on the reference page. This should be a separate page placed at the end of the paper and titled Works Cited, but it is still numbered like the rest of the pages in the paper.

The reference page is arranged alphabetically by authors’ last names. If no author is given, citations are alphabetized by title (articles a, an, the not used). The first line of each entry is flush to the left margin, but second and subsequent lines are indented five spaces or one tab—called “hanging indent.” Use double spacing between each individual entry and between the lines of each entry.

Note: See the First Page tab for an example of the first page.  An example of the Works Cited page (the last pages of a paper) in MLA style below . On the first page, note the header containing the author’s last name and page number at half an inch from top of the page, justified to the right. Also, note the double spacing throughout, beginning with the student’s name, instructor’s name, course, and due date. The Works Cited page begins at the top of a new page and is also numbered. Each citation is indicated by a hanging indent.

The sample paragraph above and the first and last page segments are modified from the following source: 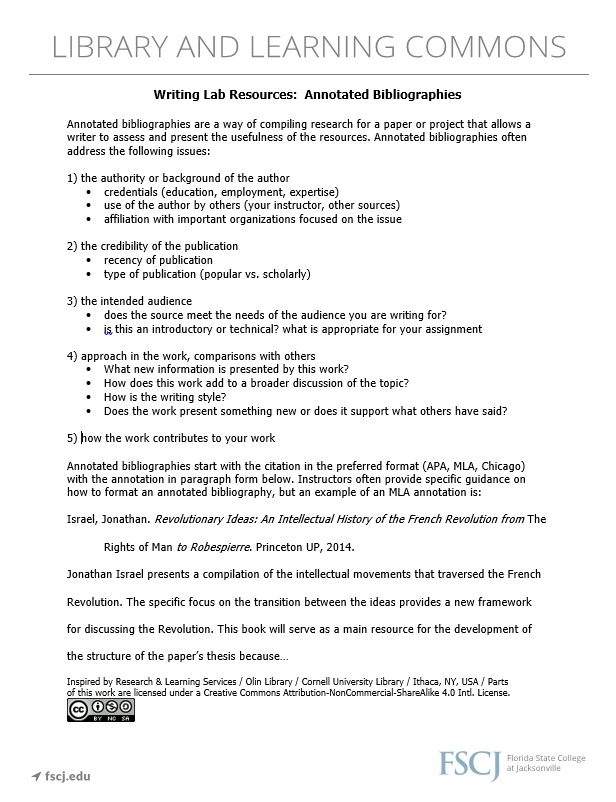 Many thanks to the South Campus Writing Lab for this information.  It can also be found in their MLA 8 Handout which is available from them in G200.  Thank you to Lisa Van Zwoll of our Writing Lab for the Annotated Bibliographies document.