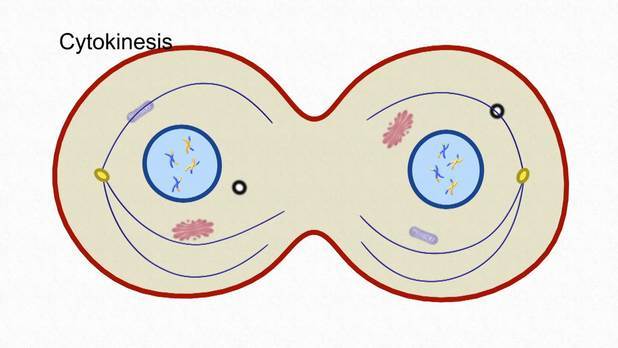 The cell cycle is a series of developmental and growth events that chart the normal life of a cell. This program uses easy-to-follow animation to illustrate the growth phases of the cell cycle and the processes of mitosis and cytokinesis that follow. The distinct phases of mitosis—including prophase, metaphase, anaphase and telophase—are described in detail. The program also explains meiosis, a variation of mitosis involving the formation of gametes in two stages. Apoptosis, or programmed cell death, is also covered, including the effects of uncontrolled cell division (cancer). A part of the series Cell Biology: Structure, Function, and Processes. (22 minutes)

Cell division is needed for growth, reproduction and to replace dead cells. Mitosis : a type of cell division that leaves two identical copies of a cell. The chromosome number is unchanged.

Stages of Mitosis
Prophase : the spindle (made of microtubules) forms. The chromosomes are visible scattered at random.

Metaphase : chromosomes line up in the center of the cell.

Anaphase : centromeres divide.The chromosomes move to opposite ends of the cell ( V shape).

Telophase : two nuclei form. The cytoplasm divides (cytokinesis ). In plants, the cytoplasm separates from the center of the cell towards the outside by forming a cell plate. In animals, the cell membrane pushes inwards from the outer edge making a cleavage furrow, so the center is the last part that divides.

Control of cell division.
Normal cells only divide if : a) the correct growth factor is present.
b) each cell is not completely surrounded by other cells.

Proteins inside the cell control the cell cycle. Cyclins in the nucleus control the replication of DNA. The 2001 Nobel Prize was awarded to the people who discovered cyclins.
Protein kinases switch on proto-onco genes that start mitosis. A mutation in a proto-onco gene can turn it into an oncogene that causes cancer ( uncontrolled cell division).

Cancer cells keep on dividing, even if surrounded by other cells. A benign tumor is limited to one site and cannot spread. In a malignant tumor cancer cells have spread around the body in the blood. Metastasis means that the cancer has spread.

1) Surgery : removes cancer cells. This is best for benign tumors.

2) Chemotherapy : chemicals that kill dividing cells. Standard for malignant tumors. Problem: current chemotherapy causes many side effects, because the chemicals kill all cells that happen to be dividing: cancer cells and regular cells like skin, blood and hair cells. So your hair falls out, you feel nausea etc. In 2001 a new type of chemotherapy was approved, that targets only cancer cells: Cancer pill

3) Radiation : kills all the cells in one spot. Standard for malignant tumors.
Problem: the radiation kills all cells in the area, whether they are cancerous or not, so causes side effects. Also radiation can itself cause new cancer to start.

Cancer in the US.

Most research is done using human cells grown in the lab called HeLa cells. These cells came from Henrietta Lacks. Cancer cells have telomerase : an enzyme that repairs the telomeres on the ends of the chromosomes.

Haploid cells - have one set of chromosomes ( n ).
- examples sperm and egg (called the gametes or sex cells).
- in humans, haploid cells have 23 chromosomes.

Comparison of Mitosis and Meiosis

B) Crossing over
Changes the combinations of genes that are inherited. May give thousands of different combinations (exact number is unknown).