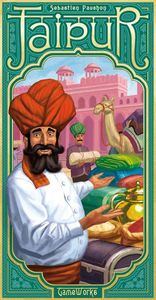 The Maharajah of Rajasthan has decided to build a new capital city called Jaipur, a place of opulence, wealth, and wondrous opportunity—especially for a trader such as yourself. You know the trade routes of this desert region, and you have access to the highest quality spices and silks. In Jaipur, you have a chance not only to become richer than ever before, but to become the personal trader of the Maharajah himself.

Jaipur is a quick, intense, two-player card game that invites you and an opponent compete for the Maharajah’s favor. Each turn, you must choose whether to acquire goods and camels or sell your stock for as many rupees as you can, but you cannot do both. At the end of a round, the wealthiest trader earns the Maharajah’s seal of excellence. The game lasts until one player earns two seals of excellence and wins!