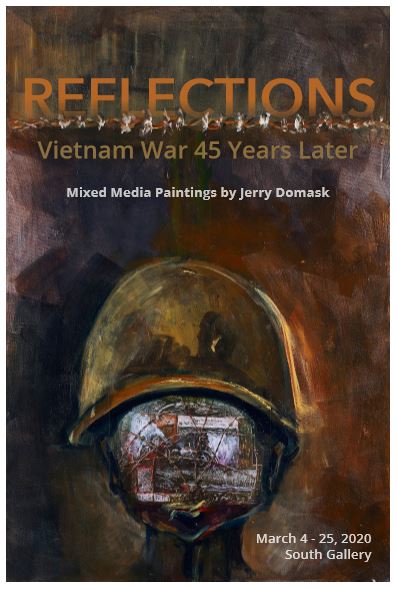 Jerry Domask is a painter and sculptor who resides in Jacksonville, Florida.  His series on his reflections of the Vietnam War was exhibited at the South Gallery in March of 2020 as part of the 2019-20 FSCJ Author Series.

The war series consists of 30 mixed media paintings based on the artist’s personal experiences and observations during the 1968 Tet Offensive in Vietnam. It includes shared experiences with fellow veterans, many conversations with former prisoner of war (POW) retired Army Major Theodore Gostas, and Gostas’ book of poems “Prisoner.”  For Domask, this series was an opportunity to work through his own feelings of sorrow, anger and loss associated with his war experiences.  It has also become a way for him to connect with and support other veterans.