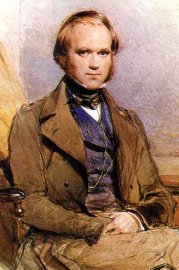 Some of the Unusual Animals Darwin Saw

Darwin's Beagle Diary
audio recording of excerpts from
Darwin's popular account of his
voyage of exploration.  This link
takes you to an external website.
To return here, you must click
the "back" button on your
browser program.
(length = 68 mins, 19 secs)

All populations slowly change over time. Charles Darwin and Alfred Wallace explained the theory of evolution in 1859:
1) All organisms produce many offspring, that are all different.
2) Most of the offspring die young before they can reproduce.
3) The few that survive have genes that adapt them to the local environment, so nature selects the best genes.
4) Over time the population slowly becomes better adapted.

This process is called: natural selection (nature "selects" the best in each generation). Later the term "survival of the fittest" was used.

This was invented in 1753 by Linnaeus. The example below is the classification of the leopard:

The scientific name is the Genus name followed by the species name, for example Panthera pardus.

Members of the same species can breed and produce fertile offpsring, so two leopards can produce cubs. Members of different species cannot breed (like leopards and lions).

Malthus ( 1800 ) minister. Malthus said that the human population will grow until limited by disease, starvation.

Lamarck ( 1810 ) biologist. He said that evolution was caused by passing on characteristics acquired during life. For example people who work out a lot will have babies born with large muscles!

Lyell ( 1830 ) geologist. He calculated that the earth was millions of years old, at least, rather than the 6,000 years that creationists believed.

The theory of evolution was jointly developed by Charles Darwin and Alfred Wallace. Some of Alfred Wallace's specimens were recently discovered. Video

Darwin and Wallace's theory of Evolution.

1) All species can rapidly increase in population, if all their young survive.
2) Most wild populations are stable over time.
3) The reason popultions do not normally increase is that resources ( food, water, nesting sites ) are limited, so there is a struggle for survival.
4) Individuals in a population vary.
5) Most of this variation is inherited.

Conclusion : Individuals who are the best adapted will survive and reproduce, ones who are less adapted will die. Darwin and Wallace called this process "Natural selection". Later the term "survival of the fittest" was used.

3) Comparative anatomy : all vertebrates ( reptiles, birds, mammals etc ) have the same arm bones. There are many similarities in their skeletons, muscles and organs.

4) Comparative embryology : vertebrate embryos are all similar, with gill slits and a tail.

6) Vestigial organs : have no function but are inherited from an ancestor where they did have a function:
eg pelvic bones in snakes. Also the appendix, third eyelid, muscles to move ears in humans.

7) Atavisms : genes from ancestors that are usually switched off can be switched on.
eg horses with 3 toes. Or humans with dense hair all over the face "werewolf gene".

8) Imperfect "design" : an organism just needs to survive long enough to reproduce, it is not a perfect design.
eg legs longer than neck in a giraffe. The human skull is made of several bones joined together.The human eye has nerves infront of the retina.

9) New species have evolved recently: eg Spartina cordgrass in Europe. Primula kewensis in 1920s. HIV evolved in about 1940. Just in a few months in 2009, studies have shown evolution in bacteria, and demonstrated one species splitting into two new ones in butterflies, beetles and birds.

The oldest human fossils are roughly 6 to 7 million years ago. Fossil. More than 4 million years ago Ardipithecus in Africa had a mixture of "primitive" (more ape-like) and "derived" (human-like) characteristics. Later (roughly 4 million to 2 million years ago) the genus Australopithecus evolved. It was only found in Africa, slightly larger than a modern chimp, but walked on two legs.

The genus Homo evolved about 2 million years ago. Homo habilis : used stone tools, was about 5ft tall, had a small brain, only found in Africa. Homo habilis

Homo neanderthalensis : largest brain of any human, buried their dead. They were hunters, living mainly on large mammals. They cooked their food. DNA studies show that Neanderthals and Homo sapiens did not normally interbreed, even though they lived in the same areas. There is still debate about why the Neanderthals became extinct, but our species survived.

In 2004 skeletons of a new species of human were found on Flores, Indonesia. They were smaller than pygmies, but hunted large mammals and cooked their food. Homo floresiensis

Homo sapiens : spread worldwide, the only surviving human species. skull Modern humans all come from a small population who moved out of Africa less than 100,000 years ago: When humans faced extinction Early humans were "hunter-gatherers" - in other words they hunted animals and collected fruit, berries and shellfish. Humans did not start growing crops until about 10,000 years ago.