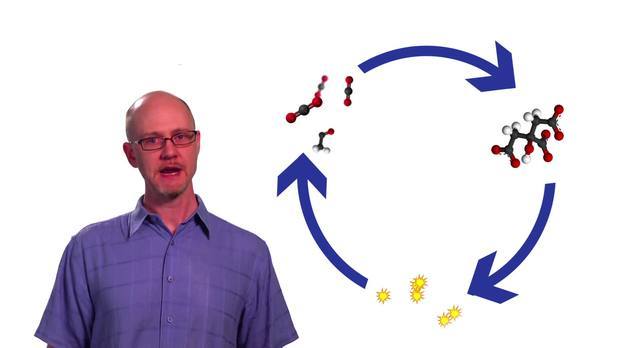 All living organisms need energy to perform day-to-day tasks. Using straightforward, vibrant animation to anchor otherwise complex ideas, this program shows how that energy is created through the metabolic processes of catabolism, aerobic cellular respiration, and anabolism. Respiration is covered in depth, with detailed explanations of glycolysis, the Krebs cycle and the electron transport chain. Also covered is fermentation and anaerobic cellular respiration, and how cells help build large, complex molecules through the process of anabolism. A part of the series Cell Biology: Structure, Function, and Processes. (22 minutes)

Metabolism - all of the chemical reactions in an organism.
Metabolic rate varies between different species: temperature and size are the main factors.

ATP ( Adenosine Tri Phosphate ) : stores chemical energy. It has three phosphate groups attached to adenine and ribose (the same sugar as in RNA). ATP is mainly produced in mitochondria.

First Law of Thermodynamics : energy can be changed from one form to another, it cannot be destroyed or created.

Second Law of Thermodynamics : entropy ( disorder ) is always increasing. So things fall apart and break down, because the general trend is towards disorder. Second law

Enzymes are specific ( each affects a particular substrate ). They have an active site that the substrate molecule fits. Enzymes work very rapidly (up to 100,000 chemical reactions per minute) so are only needed in tiny quantities.

The speed of enzymes can be affected by :